How to turn your dumb TV into a smart TV 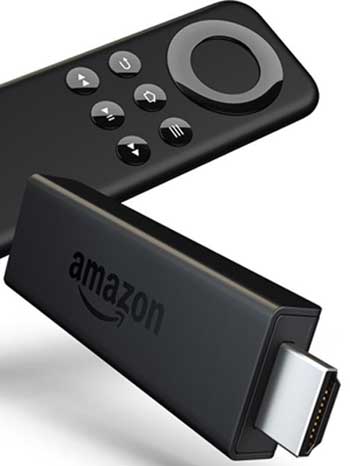 iring some sort of tech qualification to even
understand the instructions. Well, although that might have been the case a couple of years ago, today smart TVs are much easier to get for your home. Best of all, with the new generation of devices, you don’t even need a new TV. One small device costing c.£30 and your run of the mill old TV becomes a shiny new smart TV in a single step – so no need to bin the old telly!

And with a smart TV there are many benefits, including:

Pretty easy to set up and very simple to use, the range of Amazon Fire devices provide access to a wide range of Amazon entertainment, as well as plenty of other sources. The Fire Stick is one of the most popular devices – insert it into the back of most types of TVs and, as long as you have a wireless connection, you’ll be able to access movies, catch up TV and plenty of box sets. Amazon services obviously tend to push Amazon content pretty hard – although there’s plenty of good things to watch on Amazon Prime and Amazon Instant Video so that’s not necessarily a bad thing. However, you can also watch Netflix, YouTube and apps for major TV channels like ITV and BBC iPlayer.

For Apple aficionados, the Apple TV has to be the first choice to upgrade your TV to ‘smart.’ The interface is the same simple, stylish presentation as with every other Apple product. Plus Apple TV works on the same Apple ethos i.e. you only pay for exactly what you need, when you need it. With Apple TV you can stream iTunes content from your PC, Mac, iPad or iPhone running Apple’s software and the range of on demand extras is impressive.

Google Chromecast scores highly with lots of consumers for being one of the cheapest options on the market, as well as one of the simplest to use. It is basically a dongle that you can plug into whatever the device is that you want to stream from (so, for a TV you just need a USB point). Literally, a plug and go device, the Google Chromecast takes very little set up and can be operated using a mobile device as the remote. Once online you’ll have access to 4k streaming of services, such as YouTube and BBC iPlayer straight away.

Android rarely seems to come out on top of Apple and there has been a lot of comparative criticism of Android TV since its release. Yes, it can feel a little clumsy to operate and there’s no doubt that the app store to which you have access just doesn’t compare to Apple options. However, it’s worth noting that Android TV was the first of its type to offer Netflix 4K content outside of a TV with the Netflix 4K app built-in. Android hubs are less identifiable than other makes as Android often comes built into the TV. However, if this is the system you want to use they are out there (e.g. Mi Box).

Although probably one of the most recent smart devices to gain popularity, Roku is quickly gaining ground. This is an all-rounder option that has great consumer reviews for usability. One of the best features is the degree of choice that you have with Roku. Amazon Instant Video, Hulu Plus, Netflix, Sling TV, Twitch and BBC iPlayer are a few of the entertainment sources you can access with Roku and you can also stream music from Spotify. The range of kit options is broad too, providing a product for everyone. The Streaming Stick is one of the most popular choices and then Premiere+ scores highly too.

One of the original successes of the streaming world, NOW TV has pioneered a new era of non-terrestrial entertainment. It remains one of the best options for turning your TV smart and is ahead of the game when it comes to increasing the range of viewing choices and providing good value for money. With access to various apps, as well as Freeview and the option to subscribe to various satellite channels on a month-by-month basis, NOW TV has perhaps the widest selection of watching options. There are two main types of hardware – the NOW TV box and the NOW TV smart box. Options such as pausing and rewinding live TV and Freeview access are available with the more expensive smart box.