On 14th October 1969, the 50p coin entered into circulation in the UK. At the time Britain was a pretty different place to be. Europe was on the agenda then too but this time it was in the context of negotiations to get into it – rather than out of it. The Internet was a distant dream at the time and online shopping, bitcoin and social media were simply not yet on the cards. When the 50p came into circulation it was larger and heavier than it is now – and it was also worth about the equivalent of £8 in today’s terms. Given the massive rate of inflation since 1969 (1,554% – i.e. general prices have risen 16x) and shifts that have taken place in the cost of living a lot has changed. 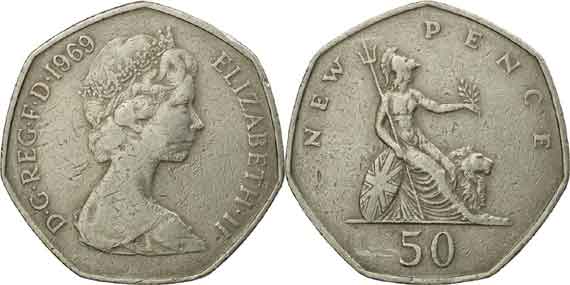 House prices are the big difference

Perhaps the most significant change in household living expenses since the 50p was introduced is how much it now costs to buy a home. The average home would have cost the average consumer £4,640 in 1969. That was the equivalent of £55,000 in 2007 when adjusted for inflation. By 2007 the average cost of buying had risen to four times that amount – £223,405. Rent or mortgage payments now consume a higher proportion of monthly incomes than they ever have before. Despite several recessions since 1969 – and a burst housing bubble – house prices have remained historically high.

Advances in technology and farming practices have brought down the cost of food. For example, chicken is now three times cheaper than households would have paid when the 50p piece was introduced. Products such as bread, eggs, sugar and coffee are roughly half the price. The average price of a grocery shop in 1969 was £1.10 (£17.24 in 2019 money), which is 27% higher than the cost today. However, with that has come other less pleasant side effects – for example, mass farming practices that have made cheap meat and dairy possible are also enormously damaging to the environment, often cruel to animals and potentially not actually that healthy for consumers given the use of antibiotics and industrial feeds.

We also pay less for fashion

Clothing is another household cost that tends to take less from our monthly budgets than it once did. Although it’s difficult to compare like for like, as there isn’t that much data, figures provided by The Guardian newspaper show that its fashion section featured a black-and-white wool coat at £34 in Debenhams in 1969 – that would be £562 in current money. Today, Debenhams’ most expensive coat is £349. However, again there are consequences to the access we have to cheaper clothes – the fashion industry is now the second most polluting in the world behind oil.

Some entertainment is much more accessible

For example, if you wanted to stay in and watch TV back in 1969 you’d pay £1 a week to rent a TV set (£865 a year in today’s money) but you’d only get three channels and two of them would be in black and white. However, if you were planning to go out you might find yourself paying a lot less than today. Tickets to the theatre, for example, are a lot more expensive in 2019 – back in 1969 you’d have paid the equivalent of £4 – £20 to see Fiddler on the Roof but today the same tickets are £20 to £145. The price of a night in the pub has risen too – in fact, beer prices have doubled since 1969. Our tastes have changed significantly as well. There were no Pornstar Martinis back in 1969, instead, the entire world (including the Queen) was drinking Mateus Rosé.

It was cheaper to own a car

The average price of a car back in 1969 was £1,060 (or £16,642 in 2019 money) – that’s around 21% lower than the average cost of a car today, but today’s cars are safer, better built, better equipped and probably more reliable. It’s worth noting that car finance didn’t really exist 50 years ago when the 50p was first introduced so if you didn’t have the cash to make the full payment on a motor then you’d be stuck without anything to drive.

Wages are much higher today

Although many of our household living costs are significantly higher today than 50 years ago, salaries are too. In fact, the average salary was 45% lower in 1969 – around £15,109 in today’s money. There have also been improvements in the gender pay gap since then – real pay for the average male employee has risen by around a third since the 50p was introduced but has doubled for women. Any gender pay gap is too much of a gender pay gap but at least women are slightly better off than 50 years back.

The cost of living has changed enormously since the 50p was released into the UK economy back in 1969. Much of the economic and household change has been positive but some has had unintended consequences that are still yet to be resolved.