The Bank of England has revealed that banks in the UK are planning a credit squeeze on UK consumers. The squeeze is likely to be the biggest since the recession happened in 2008. It comes on the back of the recent rise in interest rates, which is making those with mortgages, credit cards, personal loans and other unsecured credit very nervous indeed. So, what is actually happening in the UK credit market and should we be worried? 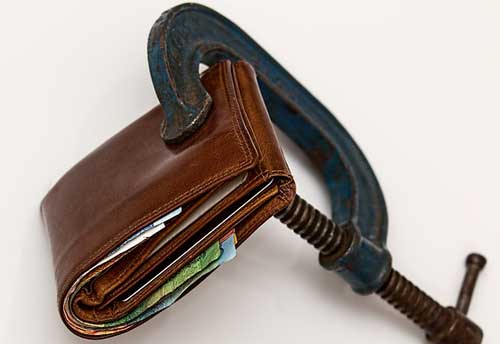 According to The Money Charity the average debt per household in the UK (including mortgages) is currently £57,490. 35% of UK households have no savings whatsoever and a large proportion of people are walking a fine line between getting by and struggling. Credit has become a key part of life for many, which is why the idea that it could become less available and more expensive is making a lot of people very nervous.

How did we get to this point?

In 2009, the Bank of England cut interest rates to 0.5%, the first time in the Bank’s existence that the rate had dropped below 2%. The intention behind the rate cut was to try to avoid the recession that the country had entered from becoming another Great Depression. The low rates were designed to discourage saving and enable people to borrow – at the time poor wage growth and high inflation, combined with austerity meant borrowing was a very attractive option. Incentives were provided for lenders to offer loans and mortgages. So, we borrowed instead of saving. And for a while house prices rose and there was enough disposable income around to make it feel like there was some kind of recovery in progress. However, despite positive house prices and lower unemployment, the reality has always been that debt levels have been rising to an increasingly difficult level. At the same time, fewer people have money set aside for a rainy day. And then came Brexit – the drop in the value of the pound, higher prices and a lot of financial uncertainty has left economic prospects bleak.

Why are banks planning the credit squeeze?

Essentially, over the past eight years debt levels have been rising for the reasons already described. Now, there are warnings that the UK’s debt mountain has risen to “dangerous levels.” For lenders that’s a difficult position – a combination of a sharp rise in interest rates alongside an increase in unemployment would leave lenders with abandoned debts that could not be serviced. In September, the Bank of England warned that circumstances such as this could leave banks with £30 billion in losses on credit cards, personal loans and car finance. Now that the Bank of England has already taken the first step and increased interest rates – albeit only by 0.25% – lenders are even more nervous.

What does a credit squeeze mean for UK consumers?

Many UK banks will be looking to clamp down on the supply of unsecured credit. That means credit criteria will become much tighter and UK consumers could find it far more difficult to borrow. In the third quarter of 2017, lenders were already making it more difficult for borrowers to take out new credit cards, overdrafts and personal loans. This resulted in a higher number of rejected and refused applications for a larger number of people. Credit is also likely to become more expensive as a result of the credit squeeze and could be more costly to borrow, depending on where the loan is coming from.

Is the situation likely to change?

Not in the near future. Lenders in the UK remain nervous and this isn’t helped by the fact that lenders taking part in the Bank of England survey also reported higher levels of credit card defaults in the last quarter of the year. Not only that but there was also a “significant” rise in defaults on other unsecured lending types, such as personal loans.

What are the options for UK consumers?

If borrowing is going to become increasingly difficult for anyone but the most attractive candidates then it’s going to be key for consumers to try to be as appealing as possible as a borrower. Improving credit scores, reducing existing debt and cutting down on unnecessary spending will all have a part to play in that. It may also be necessary to broaden the search for better credit. If high street banks are going to become less willing to lend then a range of other options might need to be explored. Lending such as secured loans – loans secured on the home – or guarantor loans, where another person stands as a guarantor for the loan repayments, are likely to be much more popular, both with lenders looking for more security and for those looking to borrow.