With a continued squeeze on credit for people under the age of 30 with limited financial history, it’s little wonder that hundreds of thousands of Britons continue to turn to their parents for financial help.

It’s known as the ‘bank of mum and dad’ and recent figures suggest that this informal financial institution is also one of Britain’s most popular means of raising money. It’s probably little wonder – most banks of mum and dad offer indefinite repayment schedules, ultra-low or non-existent interest rates and no prospect of your credit rating taking a hit if you fail to keep up with the repayments! 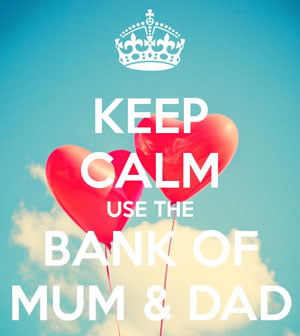 How big is the bank of mum and dad?

Research carried out by Legal and General has found that parents and friends helped out youngsters to the tune of £5 billion last year – which was the equivalent of the total annual lending of the 10th largest mortgage company in the UK.

Many youngsters find it virtually impossible to buy a home without financial help from their families despite record low interest rates. Yet their parents are often sitting on large assets in the form of property or investments.

The research from Legal and General found that parents helped more than 300,000 young people buy homes in 2016 to the tune of £5 billion in mortgage deals worth a total of £77 billion. To put that in context, that means that a quarter of all mortgage transactions last year involved some form of financial help from the bank of mum and dad.

How are mum and dad affording this?

At the moment, the bulk of this money is coming straight out of mum and dad’s bank account and other investments. But increasingly, parents are turning to equity release to help their children get on the property ladder. While just 3% of all those Legal and General surveyed in 2016 said that they had used equity release, another 3% said that they were actively considering it.

If that 3% went ahead with equity release, Legal and General says that this could help more than 400,000 extra young families buy their own home. The company says that lifetime mortgages – where homeowners receive payments for their house but continue to live in it until they die – and peer-to-peer lending might also start to play an increasing role in the bank of mum and dad.

How much money are parents providing?

The average amount that parents gave or lent to their children to help them get on the property ladder in 2016 was £17,500 or 6.9% of the average house price. In more than half of those cases (57%), the money was given as a gift while about a fifth was given in the form of no-interest loans. A minority involved interest charges of an average of 4.8%.

Continued growth in the informal bank

Record property prices mean that prospective buyers are more likely to need financial help from their family or friends than any previous generation. When surveyed by Legal and General, 33% of people under the age of 35 said that they would be asking family for help when buying a home.

While this is mainly among the under 35s, the pleas for help are also being heard among older offspring. Legal and General found that nearly one in 10 people over the age of 55 said that they would be turning to family for help to buy a home.

The largess shown by Britain’s parents towards their offspring does not, it seems, extend to spouses and offspring from other relationships. The figures from Legal and General show that three out of five parents surveyed said that they would not consider helping a son or daughter if the relationship included spousal children from a previous relationship.

By 2035, Legal and General estimates the average family contribution towards a son or daughter’s home will be more than 50% of an average household’s net wealth excluding property. The company says that it believes that with rising life expectancy these figures are likely to become unsustainable as older people face increasing care costs.