Why has Provident Personal Credit “Imploded”?

Home credit provider Provident Personal Credit has been going through some serious problems recently, peaking in August when its share price dropped a huge 66% in one day! The significant crash in the share price of the business wiped around £1.7 billion off its stock market value. In June, the business had already made statements to the effect that it was struggling but the size of the crash in value was still fairly unexpected. So, what happened to Provident and is the operation salvageable? 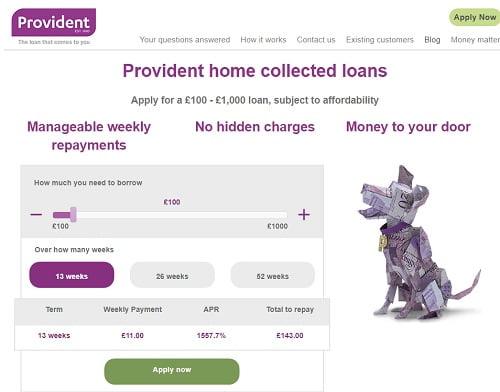 Who is Provident Personal Credit?

Provident is a doorstep lender. Home credit or doorstep loans are popular with consumers who aren’t keen to arrange finance entirely online or go into a bank to do it. Instead, doorstep lenders have teams of staff who visit borrowers at home, to deal with queries and to collect regular repayments on loans. It is one of many lenders that offers finance to customers who perhaps don’t have the perfect credit score and who might not be approved for a loan elsewhere.

Although there has been no definitive answer to this question yet, the problem at the heart of the share price drop is thought to be the change in the way that Provident collects its loans. Previously, the business worked on the basis of self-employed agents collecting the debts on behalf of the business. However, it recently looked to make a switch from using self-employed teams to creating a new employed workforce. Some say that not enough of the company’s workers wanted to convert to being employed. Others point to the introduction of new technology that was designed to make life easier but actually created chaos. Software recently introduced to the business has apparently been responsible for multiple errors in scheduling, sending employees to the wrong houses or on repeat visits. Whatever the causes, Provident’s collection rates dropped from 90% in 2016 to just 57% in 2017, causing a huge drop in value for the business.

Although Provident was attempting to upgrade its business when the problems began, it has not yet managed to halt the feeding frenzy of other lenders (such as Morses Club) snapping up its staff. Collection agents are crucial to the business – it has even reputedly offered commission rates of 20% to stop staff from leaving. However, many other home credit lenders have already enticed existing Provident Financial agents across with pay increases and bonuses. This could spell disaster for Provident Financial as a good, experienced agent could take anywhere between 50 and 100 customers with them to a competitor.

How is the business getting back on its feet?

Provident problems lie in its lack of staff – with fewer people to collect loan repayments or sell new loans the business has seriously stalled. Add to that the gleeful competitors jumping in and taking those staff who stayed behind after the initial drop in the value of the business and many thought things did not look particularly bright for the lender. However, in October the business has started to rally. Since the share price drop in August, the value of Provident Financial has now nearly doubled and the business has said it has re-employed 300 former collection agents. So, it appears to be on the right track thanks to its recovery plan. But what about borrowers who have loans with Provident?

Provident offers small value loans to people who don’t have a perfect credit history (“sub-prime borrowers”). It’s these consumers who have been hit particularly hard by the problems that the lender has experienced. The biggest issue has been for those who have got behind on payments. For some, it has been weeks since a collection agent from Provident has arrived on the doorstep to collect loan repayments. Where budgets are already stretched the cash has simply been spent on other things and there is no backup to pay the debts now owed.

So, while the business continues to make its own recovery in terms of sorting out tech issues and re-recruiting staff, it could be sitting on a medium-term time bomb. The lender is still far from being back to maximum staffing levels, which could leave its loans continuously uncollected for some time to come. If consumers aren’t then able to catch up on the missed payments, both the lender and many of its borrowers could find themselves in significant financial difficulties with not many bailout options. As one of the lender’s customers recently told the national press, “I am on the breadline now, so I cannot afford more payments. The money we used for loan repayments went on other things.”