How money can distort power in personal relationships

Money can be a big issue in relationships – in fact it’s the number one topic that married couples fight over. And, behind cheating, it’s the second most popular reason for a divorce. The balance of money and power can also be used in the more sinister context of domestic violence and coercive relationships. One partner restricts or denies access to financial resources in order to retain control over the other. While domestic violence (thankfully) doesn’t affect everyone, most of us have experienced the tension that the balance of money and power can create in a personal relationship. Achieving equilibrium can pave a path towards contentment and happy relationships. However, when the balance is off it can spell disaster for the future of a couple. 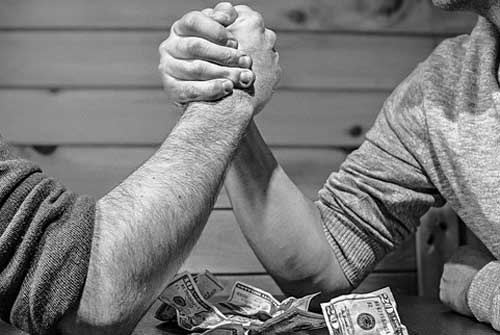 How does money and power affect personal relationships?

Most couples feel some impact on the balance of power in their relationship from the way each one earns and handles their finances. For the large majority the power balance is something that shifts continuously over time, from one partner to the other and then back again. Many different factors can influence who currently holds the “power” in the relationship and money is just one of them. However, there’s no getting away from the fact that financial issues can be difficult to deal with. These are just a few of the ways in which money can affect positions of power between two people:

Some of us just don’t like to be in control

Many people view the ideal relationship as one of a balance of opposites. In the context of finances this might be one partner who is very good at budgeting and financial management and another who is a higher earner. Some of us are more than happy to hand over the management of our joint finances to the other person if they are better at it and more interested in doing it. In most relationships this is fine. However, issues can arise when the person who has delegated financial responsibility simply can’t get it back. For example, the partner in control is using it to wield power and so is unwilling to allow access to key financial information – or to cash.

Avoiding issues with money and power in personal finances

Money and power go hand and hand in personal relationships. If you manage to work out a way to move forward together financially then the rest of your relationship has a great chance of success too.