New hikes in the cost of student loans

In April of this year, the government announced an inflation rate according to the Retail Prices Index (RPI), of 3.1 per cent. No one really noticed. Why? Well because the RPI hasn’t really had much relevance to most of us since 2003 when it was unofficially replaced as a way of measuring the average price of goods by the Consumer Prices Index (CPI). However, the RPI was once the measure of choice and still remains very relevant for students or those who have recently graduated. For that group of people the RPI increase could be very bad indeed. 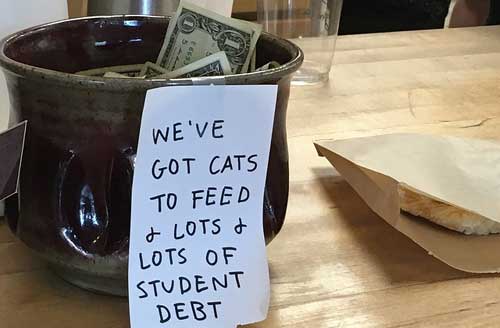 Why is the RPI affecting students?

Although the CPI is now the measure for the average price of goods, it’s the RPI to which student loan interest rates are tethered. And it’s the inflation rate that was recently announced that will be used to calculate how much interest is due to be paid from next September onwards. So, although the reception to the RPI rise was minimal, there are actually hundreds of thousands of people all over the UK who should have been up in arms.

How is the RPI affecting students?

In real terms this will increase the interest that becomes due from September 2017, both for incoming students and for graduates. According to the action group Save the Student, as a result of the new RPI, interest rates for current students will rise from 4.6% to 6.1%. Anyone who has graduated and started studying before 2012 will see charges of 3.1% – 6.1%, depending on income. Anyone earning over £41,000 will see their interest rates rise to 6.6% per year.

Why is it a big deal?

Well, student loan rates are supposed to be low – really low. The big idea of giving students loans to pay for tuition fees was that these loans would not attract crippling interest and would be a better deal than going out into the lending market and finding a standard personal loan. And that, initially, was the case. Those who were students between 1998 and 2011 pay just 1.25% on student borrowing because loans during those years were linked to the RPI or Bank of England base rate + 1 per cent, whichever is less. Anyone who was a student between 1998 and 2011 won’t see a change in what they’re paying for any money still owed. However, everyone else is facing an increase – including anyone who took out a loan prior to 1998 (for them interest rates will rise from 1.6% to 3.1%).

What about the time limits that apply?

Although the interest rates attached to student loans are changing, one condition has (so far) been left untouched – 30 years after you graduate the loan is completely written off. At first that does seem like an appealing benefit. However, for most graduates that means reaching almost retirement age before being free of the payments. For students who started studying in 2012, a graduate salary of £30,000 would be required to pay off all the loan and interest within that time frame. And you won’t be paying anything back at all until you reach a salary of £21,000. Although figures vary, the average graduate salary is currently thought to be £19,000-£22,000. With these incoming changes that could mean a lifetime of debt for those who are UK students now.