What industrial action could cost you if you go on strike

Industrial action has been much in the news recently. So far in January we’ve had tube strikes and train strikes to contend with. And that’s before the year has even really got under way. Whether you agree with the companies or the strikers – or you’re just sick of both – there’s no doubt that strikes don’t really benefit the public. However, what few of us rarely consider is the cost of striking for the strikers. How much does a walk-out really cost the average worker and where does it impact the most?

The most obvious loss is salary. Going on strike is a breach of the terms of employment. So, for every day that you’re striking you’re not going to get paid. That includes any pay that is normally received, from a regular hourly rate through to overtime. Sick pay and holiday pay can’t be used to cover the loss of salary during a strike. Times are pretty tough at the moment and that kind of reduction of salary could have a pretty significant impact on the average paycheck. That’s particularly so when you consider the number of strikes planned and the days affected. A loss of income could, if the strike extends, affect your ability to meet credit repayments and consequently give you a bad credit rating. 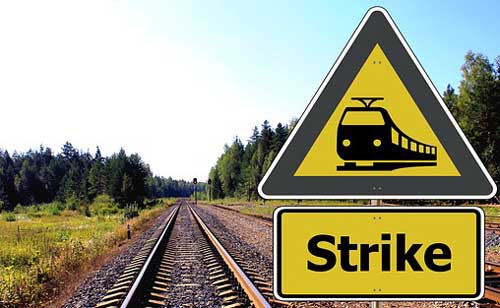 While employers of striking workers are not able to dismiss employees who are on strike, this protection doesn’t last forever. If an employer dismisses an employee during the first 12 weeks of a lawfully organised strike then this is deemed automatically unfair. Unfair dismissal can open the door to a hefty claim by the dismissed employee. However, after 12 weeks, the same restriction doesn’t apply. After 12 weeks, if an employer can show a genuine attempt was made to negotiate, then employees can be dismissed.

Very occasionally, an employer may have the right to sue striking employees. This kind of claim would be made on the basis that the terms of the employment contract have been breached. Although this kind of action isn’t taken very often the consequences could be quite severe. The employer would be suing to recover losses incurred as a result of the employee’s actions. If that connection could be made the cost could be large.

A loss of rights

Employers of striking workers are entitled to reduce the length of service of that employee by the number of days they were on strike. This may not seem that important but can have a significant effect over time. Length of service is taken into account when calculating financial benefits such as pension entitlement. It is also a factor with respect to statutory rights, such as statutory redundancy pay.

The law protects striking workers and the right to strike, as long as the strike is properly organised. However, there is no doubt that those who are involved in strike action face potentially damaged relations with an employer after the strike. Agency workers may need to be brought in to cover striking employees’ roles. This can create resentment in the business, as it’s often a very costly move. It may also reveal to an employer that some positions may not require full time staff or could perhaps be removed altogether. When it comes to making the decision to strike, the question is whether the issue involved is worth the potential damage to a future working relationship.

Strikes that are lengthy and protracted can have a very destabilising effect on a business. While most organisations have a contingency set aside to cover the cost of industrial action, this can quickly be depleted. All it takes is poor financial management of a business before a strike, a period of recession or another financial impact, and a business could be knocked off balance. One of the most extreme consequences of a strike for workers could be the loss of a job as a result of the business going under after the industrial action.

Particularly where striking workers are employed in the public sector, this can have a very significant impact on the wider economy. Striking teachers, for example, create additional childcare responsibilities and costs for parents. Striking healthcare workers create huge locum agency bills. Transport workers taking industrial action can create travel chaos. The cost of strikes is usually estimated to be in the hundreds of millions – while this may not have a direct impact on a striking worker, it will affect the economy in which they live and work.