How to create an emergency fund on a low income

Everybody should have an emergency fund – it’s the safest hedge against the ups and downs of life and will help to secure you against losing your job, long-term illness and unexpected family problems like a car breakdown or flooding in your home. Having an emergency fund means that you won’t have to fall back on borrowing money (e.g. using payday loans) to get back up and running with all the extra interest payments that come with it.

But for most people – particularly those on low incomes – having an emergency fund seems like a pipe-dream. In fact recent research from the Money Advice Service showed that  40% of the UK’s working-age population (17 million people!) have a savings buffer of less than £100. And over 70% of people survey suffered unplanned expenses during the year so demonstrating the need for an emergency fund.

When you’re barely managing, the idea of putting money aside for a rainy day seems laughable. Yet while starting an emergency fund might seem out of reach, it is actually much easier than you might think if you adopt a few simple techniques. 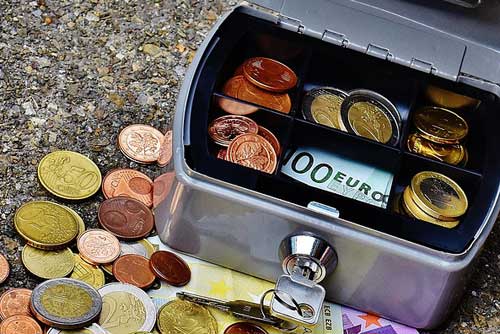 It isn’t hard to start an emergency fund, but it’s hard to keep it going

When you are living pay cheque to pay cheque, the idea of saving part of your income may seem impossible. If you decide that you need to put aside £200 a month, then there are going to be times when you have to draw down on the money you have set aside just to make ends meet and this is because a person’s spending goes up and down due to unforeseen events.

That makes it hard to keep an emergency fund going because it can be intensely dispiriting if progress is slow or interrupted by constantly having to use it to top up your income.

Changing your habits is a slow process

You can’t expect to suddenly transform from a spender into a saver. Any change in your financial habits happens slowly and so your emergency fund needs to be treated in the same way. You’re not going to suddenly build a sizeable emergency fund in a couple of months so don’t try.

Instead, start out by drawing up a household budget and categorise all of your expenses into groceries, utility bills, debt repayments, mobile phone, etc. Now work out the maximum you would expect to pay in an average month in each category. You may need to look back over the previous 12 months to see what the maximum amount you spend in each category was.

There will be some months – in the summer, for instance – when some categories (like electricity) will be lower amounts.

Once you have done this exercise in each category, you’ll see where you’re going to have surpluses some months. That money is the money that you should be putting into a savings account as your emergency fund. It should be the same every month and should not be too ambitious because you’ll be setting yourself up for failure if you are over-optimistic.

Why do you want to put this money into a savings account when interest rates are so low? Why not just stick it in an envelope under the mattress?

Two reasons. First, any interest is better than no interest and if you don’t have cause to touch the money for a long time, then you’ll be increasing the amount of return because of compound interest: the more you save, the more in interest you’ll make. And the second reason is that if you keep the money in the house, every time you feel a bit low and want to cheer yourself up, you’ll be tempted to spend it on a want rather than a need. Sticking the money in a savings account removes this temptation.

Over-budgeting is a tried and trusted method for saving money no matter what your financial circumstances are. Simply budgeting more than needed and putting the extra into an account will mean that you get into the habit of saving without having to struggle for it.

A word about debt

It may be that you’ve got a lot of debt. If you’ve got several credit card balances on cards that are not interest free, then you should always tackle these before starting your emergency fund. Why? Because interest is going to keep racking up on those balances until you make serious efforts to pay them down.

If you tackle these debts before starting your emergency fund and the unthinkable happens – you lose your job or fall ill – then the amount that you have paid off your cards will be available to you to use to tide yourself over.