Need help with your banking & saving? Let Chip do it for you!

“I just don’t know where the money goes every month.”

“There never seems to be anything left to save.”

“I can’t figure out how to get out of my overdraft with the income I have.”

If any of these sound familiar to you then no doubt you’re one of the millions in the UK who struggles to get on top of their finances. Well, thanks to the arrival of the era of robot banking you may not have these kinds of excuses for very much longer. Chip is a new banking app and a prime example of the way that technology is being used to help us overcome our worst habits. It has only been around for a year but is already proving popular as a way to make sense of a confusing financial situation. But does it work?

The premise behind Chip is that it will help to resolve financial problems and get you out of a financial pickle. So, if you’re living in your overdraft and missing all your savings goals Chip could really turn your spending habits around. In order to do that Chip requires access to your bank account – complete access, in a way that might make some people a little nervous. However, if you want the app’s help then that’s the deal. Once locked on to your bank account Chip will make assessments when you’re particularly flush and transfer the amount of cash it has calculated that you can afford into a separate account. So, for example, just after payday it might move £50 into your savings account without you doing anything. You’ll get a text notification but the idea is that, other than the notification, you don’t notice the app at work. 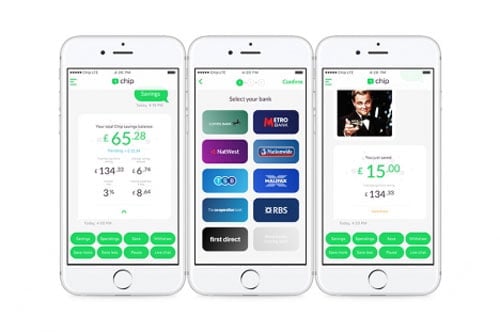 As always, it depends on the human being as to whether the technology can really do its job. Some people will simply end up spending at the same level and whatever has been saved by Chip will be the equivalent of how much overdraft has been used – in which case nothing has really been achieved. However, for others the app really could be a game changer. If Chip manages to sneak cash out of your account without you noticing and you begin to spend within these new limits you could start reaching savings goals. For those looking to create space in an already stretched budget to save for a deposit or to reduce debt, it could really help. The key is to avoid transferring what you’ve saved via Chip back into another account at the end of the month – and then spending it.

Who is Chip designed for?

Millennials are the target market for the Chip app although it could work for pretty much anyone with a smart phone. However, it’s those who have left university, perhaps with significant debt, and who have become used to living within an overdraft that the app is designed to help. It is aimed at Millennials who either can’t – or don’t want to – go down the more traditional route of budgeting and saving the old fashioned way. And if you’re someone who has tried and failed at that then it does make a lot of sense.

The rest of the market

Of course Chip isn’t the only solution to the widespread problem of just not being able to budget. There are many other ways in which technology is being created to help us save, invest, repay debt and become better money managers.

Clarity Money – this app is designed to help you get organised with your spending and, in particular, to reduce the more wasteful elements. So, it will identify wasteful subscriptions to cancel, notify you when you’re deviating from budget and also help you to save. If you’re in the UK you’ll have to wait a while for Clarity Money but platforms such as Monzo provide a similar service.

Unsplurge – if you’re useless at saving because you just can’t do delayed gratification then this is the app for you. The theory is that you’re setting a savings goal now that will allow you to splurge in the future, whether that’s on a new wardrobe or somewhere to live.

Moneybox – the Moneybox app enables anyone to become an investor with just spare change. It basically rounds up any spare change that you have left over from daily purchases such as a coffee or cab fare and then uses this to invest with a Stocks & Shares ISA. So, you can become an investor in a potential 6,000 global businesses without even lifting a finger.

Digit – “saving money without thinking about it” – that’s the tagline for the Digit app, which takes all the hard work out of saving. Once linked to your accounts it will intelligently study your spending habits and work out what you need to save and when. Digit is currently only available in the US but due to expand further afield soon.