We all like to present a positive image to the outside world. “Things are great”, “I’m doing good”, “We’re in a great place right now”. These are all phrases we all hear every day – from friends, from family members and, let’s be honest, from ourselves. But you are almost certainly wasting money.

Surveys have repeatedly shown that Britons are not great at managing money and tend to overspend compared to their parents’ generation. It’s difficult in a society which places such great store on material wealth. And as we know the nation’s favourite hobby is often cited as being shopping. Overspending can quickly grow from a bit of indiscipline to something serious which threatens financial security over the long term. 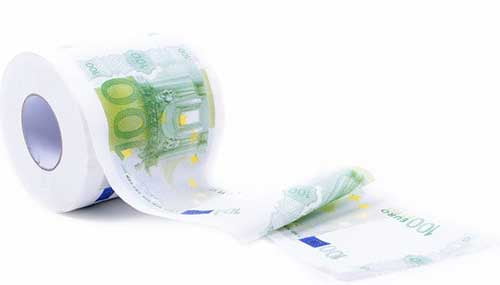 A plan to stop you wasting money

So if you want to avoid the same old financial mistakes year in year out, here are our top tips to help.

You think budgeting is boring

Most of us hate figures and the thought of sitting down and planning our spending for the next month is enough to send us to sleep. But budgeting is a sign of a healthy relationship with money. When you actually sit down and start tracking every expense over a period of three months, then you’ll feel much stronger when it comes to money and you’ll be more focused on your financial goals. When you don’t know where your money is going, then you won’t be able to put anything by for the future.

Make sure you track all of your expenses – large and small – for at least three months. Anything less than that and you won’t capture all of your spending habits.

Recent research has suggested that about 20% of people think that carrying credit card balances from one month to the next is a responsible way of managing money. It isn’t. When you do this, you are actually increasing the amount of interest you’re paying each month and increasing those outstanding balances.

Instead, focus on your cards with the highest interest charges and make a serious effort to reduce these balances to zero. It will take, on average, three months to reduce a credit card balance to zero and this is only ever done by planning and focus.

Learn to be smart when shopping

Stop buying bargains just because they appear to be cheap. You aren’t getting a good deal if you don’t actually need the thing that you’re buying.

Just because everybody else is wearing the latest pair of trainers does not mean that you have to, too. Instead focus on buying quality items that you actually need and that will last you.

Keep up to date with your bills

Nobody likes paying bills and many businesses make it a policy to pay them as late as they can without suffering legal action. But as a consumer, your room for manoeuvre is much smaller. Miss or make a late payment on your credit card and you’ll not only incur a fee and lose the benefit of any introductory low interest rate deal, but you will hurt your credit rating which will mean that future credit is likely to cost you much more.

The same goes for utility bills – many electricity and gas suppliers now report their customers’ financial misbehaviour to the credit reference agencies.

Research from the United States suggest that couples with less than £8,000 in assets are 70% more likely to divorce than those who have more. Talking to your partner about your short and long-term goals, your debts and your savings plans is vital when you start out in a relationship. If you are in a long-term relationship, then it’s never too late to start. Be honest about your debts and other liabilities and come up with a joint plan to tackle them. It will mean that you are both much more likely to stick to a joint budget.

And learning to save is one of the best financial disciplines there is because it throws a light on all of your unnecessary or unnoticed spending.