A great interview is a crucial step for anyone looking for a job offer from a new employer. However, it’s also the stage that many of us fear the most – and the part of the recruitment process so often left to chance. If you want to maximise your chances of being selected then these 10 essential tips will help you land the role. 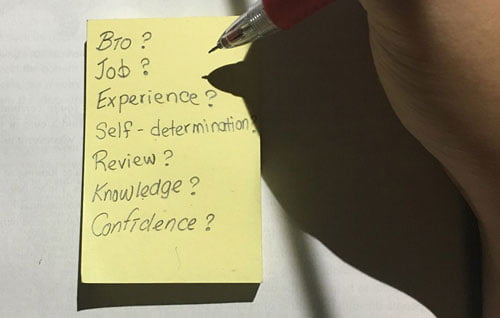 According to a survey by employment website Monster jobs, 93% of employers agree that the level of candidate interview preparation will have an influence on whether or not an offer is made. Employers specifically look for candidates who have prepared for an interview and they have enough experience to spot those who don’t. Preparation could include everything from extensively researching the role and the market, to getting information about the business culture from social media and forums.

In that same Monster survey, candidate timekeeping was the top most influential factor in terms of what employers look for. If you’re late then you’re on the back foot from the very start.

Eye contact, a firm handshake and whether or not you slouch can tell an interviewer just as much about your ability as a candidate as anything that you say. For example, an inability to maintain eye contact could be interpreted as anxiety, boredom, low self-esteem, disrespect or dishonesty – none of which are the kind of qualities you want to convey to a potential employer.

Interviews are not just about what you say but about how you engage with the people in the room too. From the moment you shake hands, the person opposite is giving you information about the business, its culture, the role and their expectations. If you listen and then show that you’ve been listening you’ll be able to convey good communication, as well as picking up information that might be useful in later responses.

Some interview questions can be tricky to deal with and your instinct might be to try and avoid being honest. However, the reality is that an answer avoiding the question is likely to make a much worse impression than just being up front to begin with. It’s also important not to waffle – the assumption that these people have all the time in the world to listen to you will never go down well. Try to be clear and concise and provide the information asked for, no more and no less.

What’s your unique selling point? You’ll know from the job ad what kind of qualities and skills they’re looking for, such as strong communication and effective management. Go armed with examples that illustrate your abilities in these areas so that you can weave these into your responses where appropriate. Prepare an elevator pitch that sells you as a candidate in 30 seconds. If you go in with a good idea of why you’re the best choice then this will filter through into everything you say.

Swearing, overly familiar behaviour or inappropriate comments are never going to work in an interview situation. However, building a rapport will do a lot for your chances. 60% of interviewers will look at the quality of small talk when assessing a candidate (according to the Monster survey).

You don’t have to be perfect in an interview so if you’re not sure of something then ask a question about it. Intelligent questions can open up a discussion and will show that you’re fully engaged with what’s being said.

You might be leaving your last job under a cloud, or you may have been treated seriously badly by a former manager. However, your next interview isn’t the place to rant about it. In advance, prepare a few words or phrases that put a positive spin on a difficult situation so that you have them to hand if you need them.

According to a survey by Office Angels, 90% of employers like to throw in a ‘killer question’ during an interview. These are the questions specifically designed to push you off guard, such as “what’s the worst mistake you’ve ever made” and “how do your colleagues see you?” If you feel like a question has knocked you for six then take a breath and pause. Smile, collect your thoughts and then answer with the best of intentions. Few people come out smelling of roses from a killer question but if you answer honestly you should pass the test.